EASD 2022 - Diabeloop, a leader in therapeutic AI applied to insulin delivery, reports today on 12 months of use of its hybrid closed-loop DBLG1 System on a large, multi-country patient cohort. While Time in Range (70-180 mg/dL) still shows constant improvement, time spent in hypoglycemia stays significantly low. Users share how these clinical results, combined with a growing trust in the algorithm has led to fewer interactions with the device and improved quality of life.

The innovative company Diabeloop, which will be present this week at the EASD Annual Meeting 2022, shares new real-world data on its first Automated Insulin Delivery system use.

DBLG1 System reached the European market a little over a year ago with consistent utilization throughout this period, with merely 1% of users discontinuing use of the product3.

In line with previously presented data4, significant improvement in Time in Range is observed here on a much larger population. The cohort gathers 4,162 patients in five countries: Germany, Italy, Spain, The Netherlands and Switzerland. TIR gain is 17.6 percentage points over a year of real life use.

Pr. Pierre-Yves Benhamou, CMO and President of Diabeloop’s scientific committee and US advisory board, commented:

“When initiating a treatment with DBLG1, it can be expected that the recommended outcomes (i.e., a TIR>70%, a TBR<4% and a GMI< 7%) will be achieved in about half of patients. Currently in Europe, the rate of achievement with standard treatment is only 27%.”

Another significant result is that this improvement in time spent in the target range is combined with a still extremely low occurrence of hypoglycemia: 0.2% < 54 mg/dL, 1.1% < 70 mg/dL. For the patients’ clinical picture and for their overall quality of life, this means less than 20 minutes per day spent in hypoglycemia, whereas the maximum accepted in the international recommendations is 60 mins.

Andrea and Martin, users of DBLG1 System share the benefit they derived from DBLG1 System on their hypoglycemia:

“Before I started using the system, I always had restless nights, because I often got hypoglycemia at night. Now the nights are great, I have to say.”

“I feel safer knowing that I’m not going to start sweating at some point, somewhere, because I have a low. That always made me feel kind of weak. I used to work as a nurse in three shifts, so I wish DBLG1 had been available, because I didn’t really have a daily routine then, where DBLG1 would have supported me.”

In the current commercial version of DBLG1, thanks to the initial parameter (meal ratio) and intuitive food logging functionality, patients:

Based on the declaration, the glucose trend at time of meal and incremental patient data, the algorithm will recommend the insulin dose to deliver and manage the post-prandial time period. 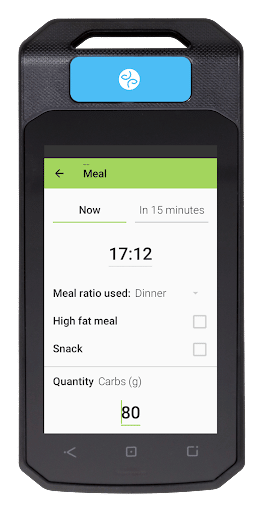 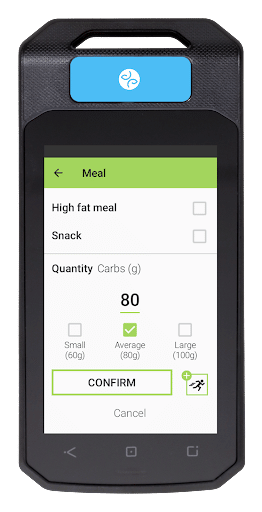 Diabeloop has already announced it was working on new versions to allow optimal management without declaration. Testimonials and data5 of DBLG1 real-life use however tend to show that patients trust the currently available device’s performance enough to skip some meal declarations and/or to declare approximative carbs quantities, and still get satisfying results.

For example, for the three main daily meals (breakfast, lunch and dinner), the patients used the shortcut (small-medium-large) for half of the 45 million meals declared on DBLG1.

It has also been observed that the longer the patients use DBLG1, the less likely they tend to declare meals altogether and the system will regulate itself. On average, one less meal is declared per day after 6 months of use.

Throughout the first 12 months of commercialization, feedback from users has been tremendous, highlighting time-saving, mental load alleviation and overall quality of life improvement.

“I would definitely say that the mental burden has become less, or that I have to put in less effort to get good values (…) My sleep in general has gotten much better. The blood sugar levels are much more stable. I remember when I would wake up at night or set my own alarm. That has become much better since I have the Diabeloop system. The nights are fantastic.”

Erik Huneker, co-founder and CEO of Diabeloop reacts to these new real-world data and users comments: “There is nothing more fueling for us than seeing DBLG1 perform over many months while it contributes to people with diabetes various lifestyles and needs. We have now equipped 10,000 patients and look forward to providing more personalization, ever more simplicity of use and more choices… to more and more people with diabetes.”

Created in 2015, Diabeloop is a high-growth company that offers AI-based, personalized solutions to improve clinical outcomes for people with diabetes while relieving them of their constant mental burden. DBLG1 System, Diabeloop’s first medical device for automated insulin delivery (AID) and DBL-hu, its solution for highly unstable Type 1 diabetes management, are both CE-marked and being deployed in Europe.

Diabeloop completed its Series C financing round in June 2022, securing 70 million euros, to accelerate its commercial roll-out, support its sustained growth strategy and its high-impact projects.

Today, Diabeloop gathers the personality, passion, and skills of over 160 talented individuals who work hard to improve the quality of life for every person living with diabetes.

1 Extrapolation on real-life data extracted from YourLoops platform – from May, 2021 to April, 2022 – 4,162 patients in Europe, who gave consent, equipped with DBLG1 System with Accu-Chek Insight insulin pump, reported to total DBLG1 System users base

2 Real-life data extracted from YourLoops platform – from May, 2021 to April, 2022 – 4,162 patients in Europe, who gave consent, equipped with DBLG1 System with Accu-Chek Insight insulin pump.